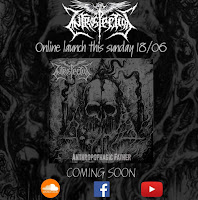 INTROSPECTION
Anthropophagic Father
Independent
Now if you're looking for extremely obscure new groups in the Extreme Metal vein, you probably won't be able to find a group more underground than Introspection. 'Anthropophagic Father' is a strange record, - sonically speaking. They're a group that are for the most part considered 'Black Metal' but in fact the only quality of the group that fully appertains to the requirements that define the genre would be the vocals, - which are at times quite lovably shrill. In the guitar department, however, less so, - there's not a single high-pitched tremolo riff throughout the record but rather the tonal qualities of the guitars are indeed quite sonorous and big. Is it death metal? Not particularly.
Is it a fusion between the two? Well perhaps before the whole 'War Metal' connotations arose in the mid-90s it would be considered so, - but in actual fact they have nothing in common with groups ala Blasphemy or Proclamation given the fact that they're much slower and riff-oriented. (And probably better songwriters.) But nonetheless this is a very nice record and should probably be given more attention in the extreme metal community. Obviously it's not groundbreaking or anything spectacular but there's some really nice moments in there, - (except perhaps the final three-to-four minutes of the album which delves into the territory of soundscapes and noise.) But they're a fine group for what they do - they know their limitations within a fairly circumscribing genre and they pull it off very well. It's a totally inoffensive and decent addition to one's black/death metal collection and will no doubt be of interest to people within that community. -Jaime Regadas