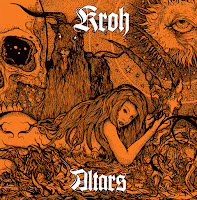 KROH
Altars
Minaturo Records
Upon first hearing the description for Birmingham-based group Kroh as a female-fronted group whose lyrical content relies heavily on the theme of occultism; one may be very quick to draw comparisons to aesthetically-similar groups such as Blood Ceremony and Jex Thoth, but alas - after listening to not even a minute of what the group has to offer musically one can safely dispose themselves of their pre-conceived expectations. 'Altars' as a record spans nine-tracks of grief-laden heavy doom with the occasional bout of serenity. Rhythmically the group strays from the realms of conventionality for the tempo is neither incredibly slow nor incredibly fast but rather sitting somewhere in-between. If 'mid-tempo doom' were such a thing they'd definitely be one of its representing acts. One interesting factor about the record is that you begin to hear more effects and studio trickery as the album progresses. At the beginning it's fairly stripped-back yet towards the end one begins to hear a lot of phased guitar riffing with a sensitivity for delay. And the guitar tone? Simply stonking. Yes, the musicianship is for the most part quite simplistic and hasn't much time at all for the interpolation of long meandering guitar-solos, - but I think in some manner of speaking that's often for the best as it most certainly doesn't leave one feeling tired and dazed afterwards. The choruses, particularly on songs like 'Break the Bread' border upon the high echelons of anthemic beauty in which harmonization plays a key role. 'Cold' is a kind of dirge-esque track in 3/4 in which you hear the quality of the drums exceeded to the max. The snares hit you right in the solar plexus and the cymbals are upholstered with a fine dash of reverb while the lyrics evoke feelings of both inspiration and dejection, - a mix they manage to pull off cleverly throughout the record. 'Mother Serpent' is groove-based whilst 'Living Water' is indubitably the fan favourite thus far. -Jaime Regadas