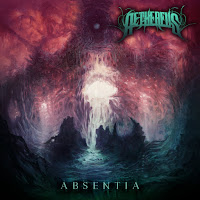 AETHEREUS
Absentia
The Artisan Era
Place of origin: Tacoma, Washington, USA
Genre: Progressive technical melodic death metal
Release date: August 10, 2018
Before discussing Aethereus I wanted to mention something about their label The Artisan Era. Based in Nashville, Tennessee USA, it was founded in 2014 to promote “a diverse range of extreme metal music that showcases extraordinary musicianship and focuses on sonic artistry” to quote their site. As a new voice in underground metal, it gives a platform to bands who present irregular, ingenious plans of attack on any and all compositional boundaries. Bands like A Loathing Requiem, Mordant Rapture and Aethereus can be the cream of a new crop of artists who rethink what can be done, challenging and effortlessly defeating naysayers who consider it clamor and its practitioners blockheads and incapable of writing proficient music. The cover art of The Artisan Era is surreal and ominous; as Aethereus’ debut full length following their first EP (2015’s Ego Futurus) it carries the torch for those bands who pressed outward and paved new ground in that vital time between 1996 and ‘99. Terms like brutal, extreme, proficient and imaginative only begin to describe how far they have come in three or four years and how much farther they can go. While paying close attention to their early 90s roots, Aethereus forge a new future for death metal instead of simply looking to it, cramming their riffage full of virtuostic progressions adding spectrums of chromism to their core blackness. Making sure to present this full length with as few weak spots as possible, Aethereus bring depth and ambience to their songs in four dimensions. Listening to their treatments of Cascades Of Light, Fluorescent Halls Of Decay, That Which Is Left Behind And The Pale Beast you’ll feel not like an observer watching the maelstrom from the ground, but as if you’re actually right in the middle of the pandemonium, simultaneously feeling it pass through you and emanate from you. What the band accomplish with traditional instruments (and the guest appearances of Vikram Shankar and Brody Uttley) has to be heard to be believed. You might not have thought bands were capable of making such a profound statement, but Aethereus pull it off. -Dave Wolff

Track list:
1. Cascades of Light
2. Writhe
3. Mortal Abrogation
4. Fluorescent Halls of Decay (Ft. Brody Uttley of Rivers of Nihil)
5. Absentia
6. That Which is Left Behind
7. The Black Circle
8. With You, I Walk
9. The Pale Beast