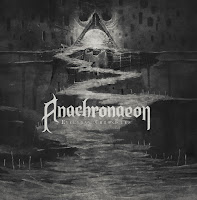 ANACHRONAEON
Everyday Chronicles
Independent
Place of origin: Västerås, Sweden
Genre: Melodic death metal
Release date: August 15, 2018
I remember being introduced to Anachonaeon halfway through their recording career. Their 2010 CD The Futile Quest For Immortality was a revelation. It was the turn of the decade and the Swedish band was a shining example of where death metal could go lyrically and conceptually, traveling beyond ‘satan for shock value’ fare as on The New Dawn (2005) and As The Last Human Spot In Me Dies (2007). Among other bands, they were the genre’s next step forward and there was growth potential to be fulfilled on three more studio albums. They had solid promotion through the Russian independent label Stygian Crypt Productions (which remains active today) and opened many zine editors and reviewers to the idea that not all Swedish extreme metal has to sound exactly like Entombed, Hypocrisy and Marduk, classic as those bands are. For a band that never subjected themselves to the rigors of touring or seeking bigger labels to showcase their work, Anachonaeon took things seriously and ran on passion and love for their craft. Unfortunately, founding member Patrik Karlsson announced that Everyday Chronicles is to be their final release, more or less because it’s better to leave the listeners wanting more than see their zeal dwindle. The band surely goes out with a bang. Everyday Chronicles keeps strong ties to the band’s genesis while expanding on their roots with subtle evolutionary procedures that make all the difference for them. As Carlsson states, “I am proud as hell of the songs on this album. They are a product of hard work and determination. It was like a second job writing them.” The effort shows with a vengeance here. From the first track Denial Card, it’s evident their time changes, classical leanings and autonomous songwriting custom has broadened on a grand scale. It’s equally evident their thought provoking lyrics have not lost their capacity to shake listeners up. From the above mentioned song: “We are the self-proclaimed masters of the earth, but refuse responsibility. In the name of profit and egoism we always turn our eyes away.” This is only the first of many lyrical passages designed to inspire you to see humanity more clearly. Everyday Chronicles is thinking man’s death metal of the highest order, the musicianship and sound quality are top notch and, as with any good metal albums, everything about this one is sincere. Whether you’re a long time death metal fan or a newcomer, Everyday Chronicles is essential listening as part of a body of work people will still be talking about years from now. -Dave Wolff