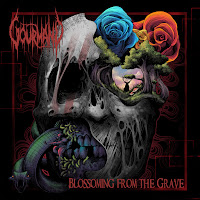 GOURMAND
Blossoming From The Grave
Independent
Place of origin: Kansas City, Missouri, USA
Genre: Progressive death metal
Recorded, mixed and mastered by Benjamin Axel Harvey at Axel Harvey Productions, Kansas City, Missouri USA
Release date: August 17, 2018
The Kansas City based band Gourmand released a new self titled album in August of this year. After releasing their first technical death metal album, the band decided to change their course towards more progressive music and it wasn’t in vain. Again, comparing it to the first one, we can feel great differences in the sound, which has become cleaner but not less heavy.
Blossoming From The Grave is a rich vision of how to expand the scope of death-metal. It can be melodic and destructive, melancholy and cruel. Their progressive tendencies still shine, with constantly morphing melodies and odd time signatures in the tracks. Use of cello and clean vocals are another indication that the band wants to create a piece of experimentation and melody, and it sounds great. The best example is the track Redemption with its graceful piano and refined melody. But in my understanding, not all the compositions with these instruments are successful. Sometimes the band is too addicted to melody, what can easily turn brutal metal into tearful melodic metal. For example, there is A Message in Wax, which was mistakenly placed at the beginning of the release. But a graceful, virtuosic guitar solo saved the composition.
An ideally groovier, more brutal journey with saturated melodies and complicated transitions is revealed in the track Perpetual Sickness. We hear tremendous transitions from tough metal to surprisingly beautiful guitars in The Price Of Consciousness. A completely uncompromising picture of technical metal without a romantic mood is presented in Empathy Gap. It’s a cruel wall of sound with confident playing, brutal riffs and murderous drum. The album ends with a deadly, beautiful composition The First Of My Name. The explosive drums, rumbling bass, and intricate melodies provide a well-rounded attack.
Those who enjoy progressive death metal that breaks molds and pushing boundaries are bound to be drawn to it. Surprisingly beautiful musical moments, a schizophrenic tone and harsh vocals keep it freaky and heavy. It’s a lucky choice for those who like technical metal with virtuosic solos, difficult constructions and unusual additions like cello or piano. -Serafima Okuneva

Track list:
1. Blossoming from the Grave
2. A Message in Wax
3. Between Vessel and Body
4. Metamorphosis
5. Redemption
6. Siren's Song
7. Perpetual Sickness
8. The Price of Consciousness
9. Empathy Gap
10. The First of My Name