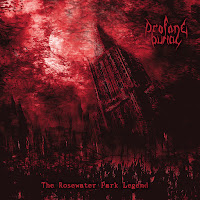 PROFANE BURIAL
The Rosewater Park Legend
Apathia Records
Place of origin: Norway
Genre: Symphonic black metal
Recorded at: Strand Studio, Oslo, Norway
Mixed and mastered by: Marius Strand
Lyrics by: Bjørn Nørsterud
Artwork by: Dalila Belazi
Release date: March 23, 2018
Available in streaming, digital and limited digipak format (500 copies)
Is anyone surprised that Profane Burial are from Norway? Can black metal bands from that part of the world still push the experimental envelope after 25 years? You may think so if you like Emperor and Limbonic Art as well as French bands like Anorexia Nervosa and Lord. But even those bands, for their achievements, haven’t gone quite as far into theatrical nightmare as this band has. I heard of Profane Burial’s debut full length The Rosewater Park Legend from Grand Sounds Promotion. The band bio, the album’s selling points and cover art all of Dalila Belazi were what first interested me. Then I read two members of the band were previously in Tristania and Blood Red Throne, and was inspired to listen. The Rosewater Park Legend waited years to be created after André Aaslie and Kjetil Ytterhus wrote enough material, found musicians to complete the lineup and started recording in spring 2017. Released one year later, the album achieves its intended goal of wedding traditional cold darkness to equally cold, somber orchestrations. Although the lyrics weren’t included in the promotional email, the track list reads like a series of horror film shorts that prey on the mind rather than shocking you with jump scares. From a literary standpoint it reads like classic literature more terrifying than Poe, Stoker and Lovecraft combined. With a circuslike theme involving strings, piano, keyboards, horns and choral vocals like Gregorian chant, The Rosewater Park Legend raises the fiendish, unhallowed black metal it’s built on to Goya-like proportions. Remember Celtic Frost on To Mega Therion and Into The Pandemonium? Few symphonic black metal albums approach the potential those two classics hinted at so long ago. As far as I know there are few albums I’ve had this to say about. The descent into madness here is felt as much as expressed through the songwriting and lyrics, and you really have to think about how far into madness it goes. As an opening track, The Tower Bell establishes the band’s elegance with eerie chants, setting the stage for a metal opera that grows stranger and more disconsolately beautiful with each song. While the vocals, guitars, bass and percussion have a theatrical feel on their own, the orchestral instruments add copious amounts of flavor through The Stench Of Dying Roses (The Children's Song) and An Interlude (Or How the Curse Of Rosewater Park Began), right up to The Tale The Witches Wrote. “One of the year’s best releases” is a term that is thrown around a great deal, but Profane Burial’s The Rosewater Park Legend is certainly a contender for the title. -Dave Wolff

Track list:
1. The Tower Bell
2. The Stench Of Dying Roses (The Children’s Song)
3. The Soldier’s Song
4. A Different Awakening (A Proclamation By The Priest)
5. An Interlude (Or How The Curse Of Rosewater Park Began)
6. The Letters
7. The Tale The Witches Wrote