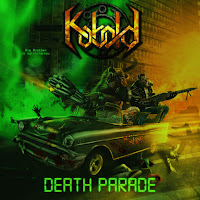 KOBOLD
Death Parade
Iron Blood And Death Corporation (Mexico)
Place of origin: Belgrade, Serbia
Genre: Thrash/speed metal
Recorded at Citadela Sound Production, Belgrade, November 2016 to January 2017
Engineered mixed and mastered by Luka "Tower" Matković
Logo by Peđa Ginevski, Đurđa Garčević & Elio Rigonat
Art by Željko Manojlović
Release date: July 1, 2017
If I had to throw this band into a genre I would say power metal but it is really progressive in its war themes so I like to call this Progressive Power War Metal. They have a real 80s feel to them, with songs that remind me somewhat of Iron Maiden on the opening track Madmans Overture going into the song Death Parade. They have very focused guitar players and also a drummer that is a real thunderstorm. These crazy Serbs know what is up! They released this album from the label known as Iron Blood And Death Corp.
The vocalist reminds me a bit of Bobby Blitz Ellsworth. I'm sure he does not have hair like him or look like him but his vocals have a strong presence like his does. The album cover itself gives you the idea that is something that could've easily fit amongst a lot of the thrash bands of its heyday. Bands like Overkill, Testament, Exodus or Kreator. Good feels can be found here.
They are straight and to the point, mean what they do and what they say. The guitars galloping pace in the songs along with opening bass lines on a track here and there really mesh well when it is all put together. Currently they have a new drummer so I'm sure the one on their debut here is the older one. They also have a music video for their second track Death Parade.
There is no end to the range in the vocals here and huge dive bombs. If war was a soundtrack these guys got it down. But I also imagine the songs being used in a video game soundtrack like Twisted Metal or a strategy war game. From the looks of it if these guys were to gig with the current thrash bands or power metal bands they would fit nicely in the bill. Get caught in the mosh!
Screaming for metal? Dying for a new band of this genre to give you hope in it again? I recommend this album to revive your hope back into the old school metal sounds of thrash making a comeback this year as well as the crossover thrash such as Power Trip or Municipal Waste. A huge adrenaline rush.
If anything share this around the metal community and send tracks to online radio stations such as Soul Funeral or even the awesome cover of Stand Up And Fight by the legends Exciter. They are powerful for being a trio.
They are creative in their range of numerous vocal changes with guests artists but also fill any void when it comes to fantastic guitar playing, drumming and steady bass section throughout. Most may overlook this album due to a striking resemblance to old Overkill albums but they offer something different worth checking out. Being either old fans of this style of music or new ones just discovering.
They are currently working on their follow up album which should be a head twister. Also check out the Live EP titled Live Act Of Violence and their EP titled Madmans Overture which is currently sold out. You can hear all three on Bandcamp.
Turn it up loud and bleed along to the march of this Death Parade! -Daniel M. Ryan