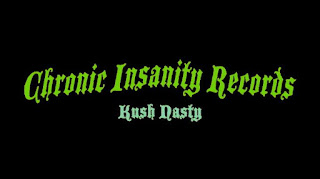 Interview with Brett Eubanks of CHRONIC INSANITY RECORDS
Describe the origins of Chronic Insanity Records and ewhat you intend to achieve with it.
The original idea for the name came during a brainstorm as I was smoking on the trail with my friend Otis. Our interests were inspired primarily by our favorite musicians, most of whom have their own record labels. Over time the passion for those interests grew into the pursuit of success with Chronic Insanity Records. The goals we aim to achieve are to reach the maximum capacity of our potential, without limitation. The focus of our productivity is creating music and artistic media of a quality worthy of sharing and recognition.
Where is Chronic Insanity based?
The headquarters of Chronic Insanity Records centered in my mind’s eye. There is no finite location for the vastness of the universal flow. Of all things to be considered as needed in the area I do not think a record label can offer too much relief in regards to resolution within the bigger picture. Provided independent operations had the right intentions I can see it as plausible to contribute in a beneficent manner with a studio outlet and the profit. A local man told me few are trying to do what Kush Nasty does in the area, and there is potential for growth. Chronic Insanity Records intends on being inclusive and generous with all we accomplish.
Is Chronic Insanity the first label started? Were you were involved in any bands before it began?
First starting Chronic Insanity Records was an original idea. When I was young I played alto saxophone in the school band. That was the only band I consider having been a member of apart from Kush Nasty. I’m an extension of all my influences. In that sense I’m involved in many bands.
Do you feel there is a need for more independent labels in your home state?
In this state and across the rest everything is all about Kush Nasty at Chronic Insanity Records. I feel more independent labels should surrender and allow my influence to rule the predominant persuasions throughout.
Do you manage Chronic Insanity on your own or do people work with you? What were the resources you have had to promote it until now?
To manage Chronic Insanity Records, I operate it on my own founding. I am not the sole person generating funding or creative ideas. Many people helped me accomplish this including family, friends, and teachers; Chronic Insanity Records reflects the world’s influence. Resources require resourcefulness and almost anything can be transmuted into leverage. Soundcloud was the first outlet I used to broadcast audio. Facebook has been the most efficient reach. YouTube also has a lot to offer those working with media arts. Word of mouth, posters and hand out cards are all viable ways to promote.
Who most helped you promote Chronic Insanity? How have their efforts paid off for the label?
All promotional efforts were organized, operated and managed by Kush Nasty. My close friend Skipp cooperates by doing everything he can to be of assistance. People listening and following may share material and that helps promote too. These efforts have reached a large audience and continue to attract a greater following.

Were Jeff and Kristy easy to work with while you made the video?
Jeff was the first to be engaged in the process. He and I were smoking and I made the suggestion we get started. Jeff did the acting role of the hanged man while I directed and filmed to begin. After that we invited Kristy to participate. She does the acting in the opening sequence alongside of myself. In the median, Kristy at the cemetery filmed Jeff and I. Kristy also filmed the scenes featuring me portrayed as The Devil. Overall working together came with ease because we have known each other long before this time. It was challenging to reassure them I had a full vision and each component would add to completion. Sometimes the directions I’d request didn’t register with my coworkers as sensible at face value.
The Devil’s False Light sounds inspired by Tarot mysticism. What study did you undertake on the Tarot, and how do your performances with Jeff and Kristy represent it?
The appropriate terminology for the science that inspired the symbolism represented in the video is Universal Dogma. Tarot is used practically for cartomancy divination. As much as I am willing to share in regards to the study has already been clarified. An alternative is to consider it is Tarot that represents our performance. The idea of what we are becoming, became, and will become is hidden behind the illusory veil of mysticism. Denial of any separate existences is the primary principal. With gnashing teeth the serpent devours its own tail.
Are there any special methods you use when filming and producing videos ? Do these methods usually result in the effect you’re looking for?
There is no special method used in the production. Everything about it was made up on the spot. The weird piece is Fire And Light the song fit so perfectly in the timing of video edits without effort. The music just fit as it was. It all came together as if it were already in existence prior to its physical formation. Effectively, the methods we operated did have a successful result.
How much creative freedom does independently producing your videos give you? Do you intend to continue in this way instead of working with producers?
Independently producing the video gave me ultimate liberty to create with unrestricted freedom. It was awesome to produce using my own discretion. Right now I do intend to continue working independently as a producer, yes. Having the alliance of other producers is not something I am opposed to. My skills are savvier in audio production more so than film. There is no denying that film has a more gratifying potential with the inclusion of film production technology that I lack. It would truly be nice to achieve a video quality that rivals more of my favorite horrors.

Do you plan to continue with Kush Nasty as a solo project? Did you ever consider working with additional members or did you always want to go solo?
Initially, I did not intend to be a solo artist and aimed to have a group of two or more. As time went on I was the only person I knew with enough ambition to seriously pursue the endeavor full time. For a while that was a huge drag on my confidence and was something I had to make a choice to get over. A lot of the people I wanted to represent and impress turned jealous and spiteful. My experience was more people were willing to try and harm my esteem for the project than were willing to cooperate. Today, I am happier as a solo artist and will look to include others as features in Kush Nasty productions.

If the opportunity arose, when Kush Nasty became well known, would you consider sound or video editing for other bands? How would your work be beneficial to them?
Absolutely, as a matter of fact the opportunity is available now. Anyone interested in sound or video editing is welcome to inquire. There are many ways Chronic Insanity Records can benefit others depending on their needs and budget. Bringing audio up in a mix to professional mastering is a sure way for clients to stand out with class against their competitors. Singers and songwriters desiring to have their vocals set to music can have Chronic Insanity Records write, record, mix, and, master their audio tracks. The audio can be produced with video to give clients a head start distributing their art and music.
What sort of an impact do you hope to make with Kush Nasty and Chronic Insanity Records?
That is a very tough question to offer a concrete answer to. Chronic Insanity Records and Kush Nasty hope to make an impact simply as being known for creating outstanding art and music. I don’t believe I have control over how an audience may react emotionally or choose to interpret any of our presentations. The best possible outcome is to set an example to anyone hoping to achieve extraordinary accomplishment that it can be done in this life. Beyond that, I am convinced nothing will change the world and the impact has already been determined in all circumstances.
https://www.facebook.com/TheRealKushNasty/
https://www.facebook.com/ChronicInsanityRecords/
-Dave Wolff
Posted by Dave Wolff at 2:34 PM