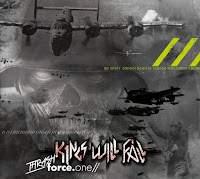 KINGS WILL FALL
Thrash Force One
Independent
Release Date: February 11, 2017
Kings Will Fall was founded in 2013 by Lukas Gross (drums) and Daniel Vanzo (bass), both residents of Sarentino (Bolzano), Trentino-Alto Adige, Italy. Rene Thaler (guitars) and Fabian Jung (vocals) joined soon afterward, and this lineup has remained steady through their debut EP Death Comes Early (released in 2015) and their debut CD Thrash Force One (released earlier this year). I missed the band’s EP and this is my formal introduction to them, I’d assume the customary heaviness, grittiness and raw energy they pour through their instruments is a natural progression from what they recorded previously. There is more than enough of it to go around and by the final track you’ll feel your eardrums were cleaned with corrosive and your brain left to simmer in boiling oil for an indefinite period. Something far worse than a simple ear hemorrhage. To the uninitiated, this thrash experience would be like sitting in the Middle Ages torture device known as the Judas Chair. The rawness carries the songwriting exceptionally well and drives the band’s commitment home. The relentless crunch by Thaler and the rumbling bass of Vanzo does this in particular in Toxic War, Shots For Glory, Burn All Fuel, Endless Pain, Damage Crown, Gängster 1948 and their cover of Motörhead’s We Are Motörhead. Another impression however was that their influences tended at times to sound too fragmented and could be tightened. Thrash, death metal, black metal, modern thrash and tribal post-thrash a la Sepultura are all drawn from. Only one song will remind you of classic thrash; particularly Slayer and Venom; and the next will sound galvanized by death metal. Maybe each song was written at different times or the band wanted to show their range, but for me it made the tracks sound too disconnected from each other. I do believe Kings Will Fall can improve in this department and achieve more uniformity upon returning to the studio. Still the band’s thrash roots manage to hold everything together, allowing enough potential for the band to condense their influences. Should they work toward this I can see them becoming an unstoppable underground force, to loosely coin a phrase. -Dave Wolff