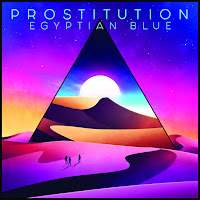 PROSTITUTION
Egyptian Blue
Independent
Release date: October 10, 2017
Prostitution is a power trio from Williamsburg, Brooklyn who describe their third EP Egyptian Blue as progressive blackened metal. The first two independently released by the band are Prostitution from 2011 and Listless from 2013. Both of those EPs have two tracks each and Egyptian Blue, which was also released independently, has three. Already they are showing the potential to become another unique voice in the New York underground. From the manner in which they describe their music, Prostitution incorporate elements of thrash, black metal and psychedelic rock. Their efforts to make things unique is their psychedelic elements and the special attention paid to melody and harmony. Pink Floyd is cited as their most significant influences on this EP. This sounded intriguing in theory and I wanted to see how much they put their formula into practice. As I listened to its first track Hypergiant I could discern shades of Pink Floyd subtly written into it, deeply ingrained with the black and thrash metal influences they draw from. This is especially apparent in Russ Cowen’s guitars, as he plays the biggest part tightening their aggressive, extreme and spacey/psychedelic influences. Whether or not he intended it I perceived occasional death metal hints, obviously in the sections with down tuned guitars and double bass percussion from Jason Spence. For the most part this was more recognizable than the thrash influences, that’s unless you consider the moments calling Voivod (Dimension Hatross, Nothingface, Angel Rat) to mind. I makes sense seeing it this way since Voivod brought classic rock a la Pink Floyd and Rush into their brand of thrash metal in the late 80s and early 90s. I don’t know if they listen to Voivod regularly but The Boat and Elevated Droves (particularly its ambient, otherworldly conclusion) had me mulling over the possibility. Cowen puts loads of effort into directing each track through riffs and time changes that sound distinct from one another but linked tight with them. He has approaches to writing that differ from most, just enough to be noticeable. The notes written into his progressions, his solos and his use of dissonant chords embodies a style that can be instantly recognized. The only complaint I have is about bassist Jesse Adelson’s vocals which didn’t seem to fit the music as much as it would have if they were more similar to traditional black metal vocals. Even after releasing a few EPs the band is taking long strides in standing out from the rest, and Egyptian Blue demonstrates the fruits of those labors. -Dave Wolff