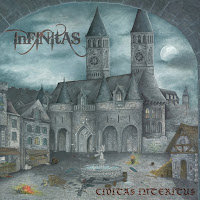 INFINITAS
Civitas Interitus
Independent
Release Date: May 5, 2017
Sometimes when I hear of new folk metal bands I have mixed reactions. First it’s always welcome to hear of a band doing something to add more scenery into their music by working string instruments into it. Then I wonder if there is a band out there who can take their music further than a band like In Extremo. Few bands could but many come close in their own way. Some coming to mind are Finntroll. Amorphis, Ensiferium, Mithotyn, Wintersun and Bran Barr. It’s pleasing that Switzerland’s Infinitas (not to be confused with the German black metal band) can be added to this list. Even without the complete number of instruments In Extremo record with they have a way of captivating the listener by making use of what they have on hand. On Civitas Interitus the violin is mostly to complement the standard guitars, bass and drums. The band sports a female vocalist for those of you into the mystical qualities of female fronted bands. What distinguishes Infinitas sound wise from folk metal is their emphasis on odd melody and catchiness, along with noticeable classic thrash influence. Their first EP Self Destruction was released in 2015 while this debut full length was released this year. Apparently it hasn’t taken them long to develop and find their own voice. You get a feeling you’re going to get something different from what you would expect from folk metal from the introduction The Die Is Cast, a theatrical piece depicting someone awakening to find himself in another world, one that is unusual and mysterious. One you might think was imagined by a classical metal band. The intro is followed by the song Alastor, a bizarre mixture of mournful violin, trenchant black metal influence and brighter thrash influence. Somehow the band makes the combination work and the pieces fit together through arranging them properly. The job is so convincing that Civitas Interitus begins to grow on you before the second track ends. The contrast between the mournful and the uplifting is an innovative proposition as to what can be explored in the folk metal genre. Labartu continues this inventiveness, opening with a medieval theme that exercises your imagination while setting the tone for the following progressions. You get more opportunities to use your imagination from the chimerical instrumental Aku Aku, the track Skylla that goes from goth metal to serene instrumentation to a theatrical ending, the song Amon that makes more use of the contrast between violins, black and thrash metal and finally the epic track A New Hope that takes the album’s narrative aspects full circle as the unnamed speaker from the beginning travels to other unknown worlds. Vocalist Andrea Böll who also contributes percussion is adept at projecting her voice, providing a vitally strong female presence that doesn’t overwhelm what’s going on behind her. Infinitas is obviously making an effort to stand out and fans of thrash and folk metal should check them out. -Dave Wolff