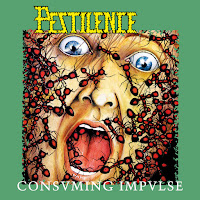 PESTILENCE
Consuming Impulse (Reissue)
Hammerheart Records
Release date: October 13, 2017
More than thirty years after their inception in 1988, Holland’s Pestilence are being honored as having spawned the finest recordings of death metal’s formative years, according to Hammerheart Records. From their 1987 demos Dysentery and The Penance to Malleus Maleficarium their debut full length in 1988 to 1989’s Consuming Impulse) their inspiration from German and American thrash evolved into early death metal. Consistent, unrelenting touring helped to secure their status as innovators of the genre. This was when death metal was not yet mapped out completely, many chapters of its book had yet to be written and anything was possible as far as where it could be taken. On their sophomore release Pestilence carried the technical wizardry of Evil Chuck & Death to the next level, adding the heaviness of Sepultura and the immeasurable desolation of bands like Paradise Lost. Also, improving upon thrash metal’s diatribes of being mortally wounded and facing one’s impending decease, penning lyrics that were more descriptive and personalized. Perishing of thirst in the desert, choking to death under skies replete with pollution and having your body succumb to an unknown disease after a lengthy struggle and other themes were there to experience in graphic glory. Even the cover art suggested great mortal peril brewing inside, right to the horrified expression of a nameless someone being devoured alive by fire ants. At this point their thrash influences were still prominent in their songwriting, only more downtuned and more primal. Pestilence were furthermore one of the first bands to enhance their songs with occasional keyboards and contribute a horror element to the imagery cited above. In all these ways this disc is a classic and a must have for newer DM fans who were just recently introduced to it. Hammerheart is re-releasing Consuming Impulse with remastered production, a demo track for the 1989 release, and finally songs borrowed from live shows in 1988 and 1989 for all you veteran tape traders out there. The label has obviously taken pains to compile this reissue and give DM fans more for their hard earned money, so show your appreciation by giving the hits to the album’s Bandcamp link and picking up a copy. Hammerheart is offering the reissue on CD and various shades of vinyl via online ordering, in addition to shirts and other merchandise. -Dave Wolff