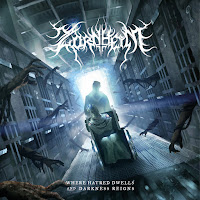 ZORNHEYM
Where Hatred Dwells And Darkness Reigns
Non Serviam Records
Release date: September 15, 2017
Zornheym on Facebook
Zornheym on Youtube
Zornheym on Twitter
Non Serviam homepage
Non Serviam on Facebook
Non Serviam on Bandcamp
Non Serviam on Youtube
Non Serviam on Soundcloud
Non Serviam on Twitter
As I gathered when I discussed the making of Where Hatred Dwells And Darkness Reigns with Zornheym founding member Zorn, it’s an album of no small undertaking. Its release has been long awaited since I reviewed its first advance track to when I interviewed Zorn the founding member and driving force behind this project. A taste of what was to come was revealed in two advance singles, The Opposed and Silent God. The latter advance single (which I heard courtesy of Qabar Public Relations) had an impressive response after its release, receiving 27,000 Spotify downloads. Needless to say that generated quite a buzz. Being able to listen to the complete full length after learning of the research conducted for it, I feel more familiar with the subject matter and can hear the songs with less trepidation than people more touchy, sensitive or easily offended probably would. Before founding Zornheym, Tomas Nilsson was working with Dark Funeral, Devian and Suicidal Seduction and became the guitarist for Aktiv Dödshjälp a Swedish band fusing death metal, black metal, crust and grindcore. After parting company with Dark Funeral, Nilsson transformed a sudden idea into a full band that would pose a greater challenge to one-sided notions of extreme music. He made his vision a reality with vocalist Bendler (also of Facebreaker), drummer Angst (also of Diabolical) and guitarist/songwriter Scucca. Together they construct a monumental recording that incorporates black metal, symphonic metal and a living, breathing narrative of a mental asylum, from the perspective of its inmates. Knowing I had to hear it in its entirety to receive the full weight of its presentation, I already had the impression this would be a musically and lyrically brilliant concept, even before its projected release. I can say a band hasn’t presented the horror of insanity and darkness since King Diamond released Them and Conspiracy in 1988 and 1989. The Long Island based band Them released the incomparable ghost story Sweet Hollow a year ago; Where Hatred Dwells And Darkness Reigns is to true life horror as that album is to paranormally based fiction. More so, Zornheym take their black metal roots to plateaus of talent and sophistication undreamed of when the first bands from South America, Canada and Scandinavia showed up. Where Hatred Dwells And Darkness Reigns takes things further, acquainting you with the personalities you meet within and giving each their own identity so you get to know them. The band takes you on this journey with the assistance of a full orchestra. The addition of violin, cello, acoustic guitar, keyboards, harpsichord and a chorus has been done for many years, but on this album it adds new dimensions you still may not have expected from extreme metal. The keyboards and choral voices in particular give the songs a semblance of algidity, lightlessness, derangement and hysteria that is felt as much as it is heard. As research for this album, Nilsson watched several televised documentaries about serial killers and conducted interviews with prisoners incarcerated for various crimes. This was an important development in preparation for it as it furnishes the characters with a sense of humanity. The advance stream from Qabar PR didn’t include the lyrics, but it did include a link to the first part of a graphic series illustrated by Anu Bring and scripted by Nilsson as a companion to the album. According to an article in Toilet Ov Hell where the series is previewed, the unfortunate tale of “Patient ZH000A27” may have been inspired by the true account of one Edward Mordake, who according to legend was driven insane by “a malevolent second face on the back of his head.” Where Hatred Dwells And Darkness Reigns was released on CD and Digipak formats, and a special edition featuring the graphic series. Check out the band's  promotional video for The Opposed and watch videos about its making on Non Serviam Records' Youtube channel. -Dave Wolff

Track list:
1. The Opposed
2. Subjugation Of The Cellist
3. A Silent God
4. Prologue To A Hypnosis
5. Trifecta Of Horrors
6. And The Darkness Came Swiftly
7. Whom The Night Brings...
8. Decessit Vita Patris
9. Hestia
Posted by Dave Wolff at 3:18 PM