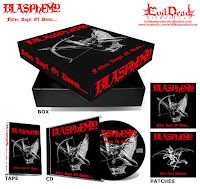 BLASPHEMY
Fallen Angel Of Doom…
Reissue to be released on Evil Dead Productions
Now this is a blast from the past to wake up to on a rainy Sunday if ever there was one. Outside my window it’s dark and rainy, and I am re-experiencing a phenomenally extreme album. Blasphemy’s underground classic Fallen Angel Of Doom… was first released by the now defunct label/distro Wild Rags Records in August 1990. Though several bootleg copies have been released since, an official vinyl, cassette or CD release is reportedly hard to find today (probably even harder to find a copy of their 1989 demo Blood Upon The Altar). The Canadian satanic skinheads took an extended hiatus from recording in 2001 but they’re still actively performing from what I have read. And in 2015/16 they released a live video and album on Brazilian Ritual Records, Brazilian Ritual: Third Attack (the video is a split with Revenge, Goatpenis and Bestymator). Evil Dead Productions is releasing a limited reissue to check out if you missed it in 1990. 500 copies and 66 copies of a special edition box set with a CD, a cassette and patches are planned and pre-orders are now available. I’d advise those of you reading this to purchase a copy as Fallen Angel Of Doom… is a monster of an album and a milestone in extreme music. It was cult before there was “kvlt”, a logical progression from Venom, Hellhammer, Sodom and Sarcofago. Resolute, primitive, ahead of its time. With songs like Hoarding Of Evil Vengeance, Desecration, Weltering In Blood and Goddess Of Perversity, and the band’s stage names (Nocturnal Grave Desecrator and Black Winds, Caller of the Storms, Traditional Sodomizer of the Goddess of Perversity and 3 Black Hearts of Damnation and Impurity) you knew something disastrously Manichaean was waiting to be turned loose on mankind, and anything you heard before would sound cultivated in comparison. Everything about this album was malevolently evil like nothing else of its time. The demonic, vomit-spewing vocals, the calamitous guitar progressions and lead solos, the unabated percussion and the distorted production, constructed a sound that was frightening in its intensity. It personified society’s deepest fears of ritual murder and forbidden occult practices from centuries past. If you were a longtime metal fan from Black Sabbath to Slayer it was a virtual banquet as Blasphemy lyrically pushed the occult angle far further than most bands dared. At times it sounded like too much of a blur, but there’s always a need for albums with production jobs like this and the intended effect has proven to be influential to this day. Love it or hate it you can judge for yourself when the reissue is officially available. -Dave Wolff