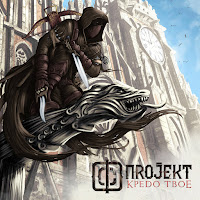 FS PROJEKT
Kredo Tvoyo (Thy Creed)
Independent
http://fsprojekt.com
FS Projekt on Youtube
FS Projekt on Facebook
FS Projekt on Soundcloud
FS Projekt on Revebnation
FS Projekt was birthed in 2011 by Efes a Russia-based poet, musician, composer and producer who christened his brainchild “fantasy metal.” This solo project is an example of how categorizations only go so far to describe a musician’s work. Handling the music, lyrics, arrangements, production, vocals, guitars, bass, keyboards and castanets, Efes put his new single together with a handful of vocalists and musicians who recorded their parts in various studios, assimilated them into the track and managed to make it work. Kredo Tvoyo is an argument of how flexible and broad minded prog/symphonic metal is still capable of being tantamount to. Samples and percussion instruments added to the instruments Efes recorded Kredo Tvoyo with may be the next step in expanding underground metal’s range, depending on how widespread the promotion and how receptive his audience is. His Youtube channel has been uploading promotional videos since 2013; if you’re inclined you can sample as many as you want and decide how groundbreaking the songs are. In the end it depends on your tastes but still it’s difficult to place this track into any single category. Kredo Tvoyo was released in January 2017 and was based on the computer video game Assassins Creed. While this is the first I’ve heard of a song based on a video game, after listening to Nintendocore I’d say anything is possible. Another major difference between FS Projekt and most progressive/symphonic metal bands is the lyrics are penned in Russian. Writing lyrics in languages other than English isn’t something that hasn’t been done before if you’re familiar with underground scenes in Europe, Asia and South America, but doing so on this track contributes greatly to FS Projekt’s unconventional innovation. Efes trades lead vocals with guest vocalist Anna Mishina and their partnership is an integral part of the big picture. The keyboards and strings introducing the song (by Efes and Oleg Mishin), the sample processing of Mikhail Trubetskov, the abrupt, consistent change in atmosphere, divergent keyboards and Latin instruments of Rodrigo Abelha form a monumental narrative if you’re attentive to the statement being made. Paweł Jaroszewicz directs the song through each tempo change which is good as a solid drummer is needed to hold everything together. You should make a point of checking FS Projekt out at least once. -Dave Wolff