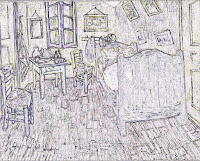 JAIME REGADAS
The Old Room
Independent
You may have heard of Jamie Regadas from the reviews he is currently contributing to this zine, but you may not have been aware he is a musician as well as a writer. This EP he just released this past week is compiled of four demos he recorded independently and released on his channel at Youtube. An earlier video clip uploaded to that channel is a promotional video by a project he was involved in with his father Carlo Regadas, Lucid. Clarity (A Break In The Clouds) is an artsy film accompanying an instrumental track described as “an experimental blend of evocative soundscapes.” For people who appreciate videos like this I recommend checking this out first, as a means of getting acquainted with Regadas’ work. The black-and-white Twilight Zone-esque imagery combined with musicianship redolent of Pink Floyd afforded me additional insight into the conception of his new project. The Old Room is far removed from Lucid with the first track Emerald, which is built on piano, keyboard synths and vocals. The song’s tone is similar as it calls images to mind as surreal as what was offered in the Lucid video. Regadas says this was the last song composed for the EP and while thrown together it sounded the most accessible and sounded closest to single material. I saw his point in general, but personally I was thinking was it mainstream accessible? In the sense of pop and the like? It had some pop elements but unexpectedly went into prog-rock mode about halfway through. So you can conclude it’s also far removed from most of what we hear these days. But definitely in a good way as it could leave a mark on indie charts if pushed. Dreaming In Neon is another piece written for Lucid by Regadas and his father. You can hear similarities to Pink Floyd as much as in Clarity (A Break In The Clouds), especially in the guitars and keyboards. There are also some prog-rock themes to be found in the song. The Curtain Call was composed in a Paris hotel room, and tells the tale of a fashion model who becomes involved in a murder mystery. Listening to this I gathered it was single material somewhat like Emerald, only with more guitars and a section that reminded me of Frank Zappa. 'Incandescence' is a piano instrumental Regadas wrote in roughly half an hour, sometime in the late evening. While he describes it as the EP’s most romantic song, it sounded like it would have taken longer than half an hour to write. I could hear shades of John Lennon and Billy Joel in this one. So all in all The Old Room has a diverse range and is worth checking out if you’re so inclined. -Dave Wolff