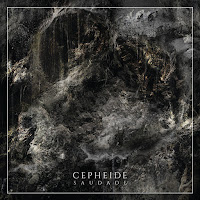 CEPHEIDE
Saudade
Independent
Release Date: October 4, 2017
I kind of liked the fact the band has very curious name. What is my favorite track? I’d have to say “Madone”; it has that mix of mystery, melody and rhythm that tells a story. My second favorite, I’d say is “Le cinquième Soleil” since it has that atmosphere of melancholy and darkness in my ears and finally third and last, “Auréole” for the mood setting guitar intro. One interesting thing about this band is that they recorded, mixed and did the art for the album nowadays I haven’t seen many do that really, must just pay a sound engineer and drawing artist to just focus on recording which personally speaking is a bit of a “it’s my baby but I’m letting someone else raise it” to an extent. The most memorable thing about this record in general I’d say the guitar/drum combo, if felt complemented quite interestingly. The only thing I didn’t liked about the album is the vocals; honestly I had issues hearing them and most of the time it felt like just random coyote howling to say it somehow. -Sophia Cynthia Cabral