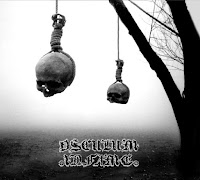 OSCULUM INFAME
The Axis Of Blood
Battlesk'rs Productions
Release Date: May 22, 2015
Usually not my cup of tea but decided to try something new, after all, life is always great when trying new things musically speaking for me…
ApokalupVI: It is the intro of this interesting album. It’s honestly a great mood setting piece that flows smoothly from beginning to end.
Cognitive Perdition of the Insane: It’s a dark vocal style with some heavy drums and great guitar riff, while it’s not my style I do dig the instrumentation.
Kaoïst Serpentis: I disliked the high pitched sound for the start, but it was quickly fixed with the speed-drumming and the guitar riff those were both intense.
Honestly the break part, to call it somehow- was… a bit confusing although that might be because I’m not used to the genre. The fading from the break to the last part was cleverly designed.
My Angel: The guitar riff with the drumming is interesting, keeping the attention of the listener. The whole song kind of made me think of those good old boss battles with a dark touch. All in all it can be considered as an epic tune.
Absolve me not!: The intro is interesting, a bit psychedelic in my opinion and for some reason I thought of a nuclear wasteland when hearing it. Short and intense, would probably use it on a Fallout-esque movie.
Let there be darkness: A bit of a play with the guitar, wasn’t bad but wasn’t memorable either. It however, has a mysterious but energetic vibe; probably I’d use it for suspense… or for a chase, depends of context.
Inner Falling of the Glory of God: One of the memorable things of this track for me is the feeling of falling due to how the instrumentation was arranged other than that I must praise the drummer’s precision.
White Void: The melodic line over the guitar and drum was something that caught my ear, made me feel it was a Tim Burton movie, like those scenes where the villain tells the protagonist why they went to the dark side and so on, felt a bit nostalgic on this one and it’s what I could consider my favorite of this album.
Asphyxiated Light: I liked the guitar line; it wasn’t boring and felt dynamic. The vocals were a bit sad in my opinion; in general it’s a solid track.
I in the ocean of Worms: A very energetic opening with the drums and the guitar, felt it was a bit re-used but other than that it’s a good start. The track itself I don’t feel fully solid, felt some doubt on the guitar, as a guitarist myself, I can relate, sometimes we just aren’t “in the place” really, physically we are but our minds are elsewhere.
Solemn Faith: Loved this intro in particular, while it does stick to the drum/guitar combo it has an interesting touch on the riff, makes me think it could be used a theme for a character in a show; more specifically the bad ass guy that really isn’t the one you want to mess with. The track itself made me remember of snakes for some reason. It is the second and last favorite for this album. -Sophia Cynthia Cabral

Track List:
1. ApokalupVI
2. Cognitive Perdition of the Insane
3. Kaoïst Serpentis
4. My Angel
5. Absolve Me Not!
6. Let There Be Darkness
7. Inner Falling of the Glory of God
8. White Void
9. Asphyxiated Light
10. I in the Ocean of Worms
11. Solemn Faith