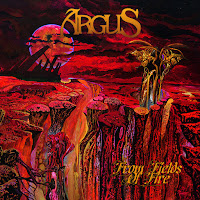 ARGUS
From Fields of Fire
Cruz Del Sur Music
The album, released September 8, 2017, is the bands fourth full length album. The band hailing from Franklin Pennsylvania is currently on tour in Europe with High Spirits. They have a classic metal, old school with a high energy modern sound. They are epic, doom metal. The track 216 really spoke to me. It says to brave the flames you need peace within the soul. That is so true in most any situation. You have to be at peace within yourself. Argus (not to be confused with Argus from Tampa Florida) is made up of Jason Mucio-guitar influenced by Marty Friedman among others, Butch Balich-vocals influenced by Ronnie James Dio as well as others, Kevin Latchaw-drums influenced by Tommy Lee and Dave Lombardo just to name a couple, Dave Watson-guitar influenced by Tony Iommi just to name one, and Justin Campbell-bass gets his influence from Les Claypool and Geddy Lee and others. I definitely recommend this album. Make sure to listen to No Right To Grieve and You Are The Curse, and all the rest of the album. It is a good one and worth the listen. Also check out Dead Horse Trauma and Generator. -Deanna Revis