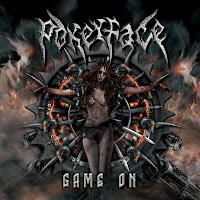 POKERFACE
Game On
Molot Records
Pokerface are a band from Russia that has been featured before in this zine and plays a mixture of death and thrash metal and this is a review of their 2017 album "Game On" which was released by Molot Records.
A very heavy and melodic musical sound starts off the album and you can also hear all of the musical instruments that are present on the recording and after awhile death metal growls and screams start to make their presence known along with the faster sections also bringing in a great amount of blast beats.
A great amount of thrash influences can be heard in the guitar riffing and melodic singing can also be heard at times which also adds in a touch of power metal along with the songs also bringing in a great mixture of slow, mid paced and fast parts and when guitar solos and leads are utilized they stick to a very old school extreme metal style and while the music has a lot of 80's and 80's influences it still sounds very modern at the same time and clean playing can also be heard briefly.
Pokerface creates another recording that remains true to the death and thrash metal mixture of their previous release, the production sounds very professional while the lyrics cover Satanism, Anti Religion, Aggression and Blood themes.
In my opinion this is another great sounding recording from Pokerface and if you are a fan of death and thrash metal, you should check out this album. RECOMMENDED TRACKS INCLUDE "The Bone Ripper" "Blackjack (Demonic21)" "Bow! Run! Scream" and "Game On'. 8 out of 10. -Loki Astaroth

This review can also be read at The True Bringer Of Death Zine. -DW
Posted by Dave Wolff at 11:59 PM