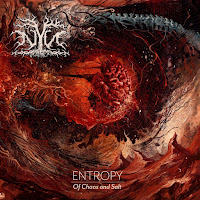 NYN
Entropy: Of Chaos and Salt
Vmbrella Records
Synthesizer solos, wacky time signatures and hour-long records aren't exactly the defining qualities of what traditionally constitutes extreme-metal. NYN, however, are an exception to that rule. Their newest album 'Entropy: Of Chaos and Salt' is a sprawling record that seems to travel across space and time with high velocity. Listening to this album was my first ever experience of NYN and I have to say it's one of the most bizarre records I've encountered within this genre for a long time. The fact that their music is strange seems to surpass the realms of subjectivity and it practically becomes a fact, - and I think that's why so many people are attracted to them and why they have such an emerging following. In many ways the collective philosophy of the group seems to be one of unconventionality in excessive quantities. As soon as the album begins you really feel like they've just thrown the entire kitchen sink in there for the purpose of maintaining such a group philosophy, - and it's a little bit disconcerting although strangely enjoyable for a little while. Now, if you're looking for an album that has memorable riffs, melodies and so forth then you've come to the wrong place. The album itself is memorable but certainly not as far as melody goes. Each song is a feast of high-tempo mayhem stacked upon layers of instrumentation which itself is stacked upon layers of solos. When blast-beats occur the double-bass sounds as if it has been consolidated into a single hit seeing as it's so fast; which, yes, does occur a lot throughout the album. They're obviously a highly technically proficient group but I personally feel that they prioritize technicality to such a high degree that almost everything else gets shoved to the wayside, which is a great shame because they're a very talented group. Keyboardist Jimmy Pitts is magnificent at what he does. He's dexterous when it comes to soloing and it's very clear that he's influenced a lot by people like Jens Johansson and Tony Carey when he takes full advantage of the harmonic minor scale plunged in glissando. They certainly aren't your typical extreme-metal group as far as keyboards go because the keyboards are as pivotal to the group's sound as everything else. They aren't used merely for embellishment or "ambience" in the same way that many traditional groups in this genre would utilize them but rather take on an identity of their own. While this isn't particularly an album I'd put on for leisurely purposes I can most definitely respect that it is a cerebrally entertaining affair and succeeds in elevating the mind to places one would previously never dare venture. I think they're probably a group that would be more entertaining in a live context than a studio one, - although admittedly it puzzles me as to how anybody could pull off these songs without a lifetime of practice. -Jaime Regadas