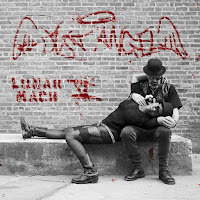 DUST ANGEL
Lunar Mach V
Independent
When Circus Of Power released their first album in 1989 I thought they were New York’s answer to Guns N Roses, with the tattoos, the street chic, the unlovely depictions of struggling for recognition among less than savory characters and most of all, the conviction in their music. Both bands introduced this reality to middle America and changed many a perception in the process. Between them, Iggy Pop, Velvet Underground and the New York Dolls there were many instances in which the Brady Bunch view of real life was encroached upon in stage presence, lyrics and attitude but there is something about Dust Angel that intimates these accounts with increased impenitent intrusion on perceptions of punk rock as a small gathering of embittered suburban kids who assume a rebellious role. Released back in April of 2014, Lunar Mach V is the stuff of pirate radio, a statement that is legitimately precarious. You get a feeling of unease just listening to it, as if one of those unsavory characters is lurking down the street from your home, or perhaps right outside your front door. The closest I’ve heard someone come to this effect was Lydia Lunch on albums like Uncensored/Oral Fixation which revealed the ugly side of humanity in a way that lingered with you long afterward. Lunch said striking out on your own is no pretty picture, and Dust Angel will relate the same message to you. Whether the soundtrack is punk, punk/rock and roll, hardcore punk, pop or metal there is no distinction between the songs in terms of the unwholesome squalor communicated through the guitars and the tight bass/drum ensemble behind them. The vocals assumed a semblance of someone who left home at an early age and saw a lot of things. Hustling, drug addiction, violence, lust, and other things seemingly too horrible to discuss at social gatherings. A line from Lucky 7 would likely sum up the theme this EP personifies: “I’ll wind up in heaven or hell, you never can tell.” But you really should listen to it for yourself to comprehend the reproduction of life on the street. The songs here are intended to be part of an upcoming conceptual album set to be titled The Life & Times of Stig Rotsky Revisited. Be forewarned this is in no way typical college radio pop-punk. -Dave Wolff