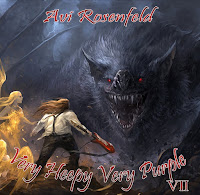 AVI ROSENFELD
Very Heepy Very Purple VII
Independent
I wanted to give the band a chance to really shake me to the ground having traveled back in the day with Uriah Heep. The vocalist does not have command of his falsetto and goes flat quite often, too often to be able to sit back and allow the music to thoroughly penetrate your realm. That said, I do want to mention that there were also moments when he shines with that falsetto, just not enough to override the bad.
The musicians play cohesively as a unit and it sounds magnificent. I do not know where the comparison to Deep Purple comes in, but forgetting that reference and focusing on the band as they are and not having those comparisons, I would say they executed a magnificent play of musical quality the likes of those older well-loved bands of yore. I want to give kudos to the organist in particular.
I would highly recommend that this band NOT use comparisons to introduce themselves and practice those higher notes from the vocalist. Then when you have that whipped to perfection, you can say who you are and everyone will know and there will be no one to compare you to - play on. -Teresa Clayton