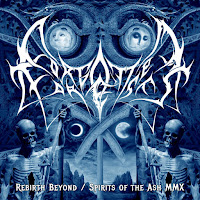 FORGOTTEN FORESTS
Rebirth Beyond/Spirits Of The Ash MMX
Acclaim Records
Forgotten Forests are a band from Bulgaria that plays a melodic mixture of doom and death metal and this is a review of their 2017 compilation album "Rebirth Beyond/Spirits Pf The Ash MMX" which was released by Acclaim Records and consists of material that was recorded in 2010.
Classical guitar playing starts off the compilation along with some drum beats a few seconds later which also leads up to some heavier riffs and melodic guitar leads being added onto the recording along with the faster sections of the music bringing in a small amount of blast beats.
Vocals are mostly deep death metal growls while the acoustic parts also mix in with the heavier sections of the music at times along with the slower sections of the songs being heavily influenced by doom metal as well as the music being very heavily rooted in the 90's and the main focus is mostly on either a slow or mid paced direction and all of the musical instruments have a very powerful sound to them.
Forgotten Forests plays a musical style that mixes melodic death metal with 90's era doom/death metal to create a sound of their own, the production sounds very old school while the lyrics cover spirit, soul, nature, mind, darkness, and eternity themes.
In my opinion Forgotten Forests are a very great sounding melodic mixture of doom and death metal and if you are a fan of those musical genres, you should check out this band. RECOMMENDED TRACKS INCLUDE "Doomed Blazing Star" "Fighting In The Age of Midst" "Final Hope" and "Nameless Face". 8 out of 10. -Loki Astaroth

This review can also be read at Dark Underground Music Zine, Doomed To Darkness Zine and Variety Of Death Zine. -DW