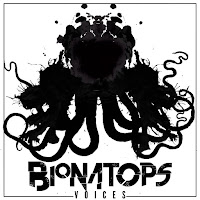 BIONATOPS
Voices
Nefarious Industries
To be released September 22, 2017
Bionatops was founded by musician Joseph Spiller with a few goals in mind. The first and most important of these was to invent his own category of progressive/technical/avant garde metal. The others were to overcome writer’s block and to alleviate the tension of writing serious compositions for other bands he has worked with past and present. System Divide, Caricature, The Binary Code and Too Late The Hero were made known to me from Earsplit Public Relations when I was forwarded the advance streaming of Voices, his project’s debut. Considering songs with titles like Soured, The Great Pancake Massacre Of 1957, Groundskeeper vs. Gopher, No Safe Harbor For Thieving Seals and From Prehistoric To Pillow there was a conscious effort on his part to make an album described by Earsplit as “lighthearted and fun.” Spiller must have been overloaded with serious songwriting since Voices. Besides being a source of levity, is decidedly uncommon for a project fusing divergent styles from scratch. I can’t reveal much about his other bands or their albums but Voices is an amalgam of death-thrash (Dillinger Escape Plan, Revocation), alternative rock (Faith No More, Primus), crossover thrash (Prong, Soulfly) and a convincing inclusion of progressive rock and jazz fusion. Spiller somehow manages to make this concoction sound organic and compact while handling lead and rhythm guitars, bass and vocals. While he was seeking a drummer to record with, Spiller couldn’t have found someone who was more on his wavelength than Jeff Willet (formerly of Black Crown Initiate) as his work plays a major part in heightening Bionatops’ originality. His playing is unbelievably proficient, a cross between Neil Peart and Pete Sandoval, bridging the gap between metal and prog-rock even more. When I hear Voices, Ingrate and drummerboy #1 I doubt Voices would have had the same impact with a drummer who approached it conventionally. Voices is to be released on a limited CD run and will be made available in digital format. See Earsplit for news of an upcoming tour with Caricature. -Dave Wolff