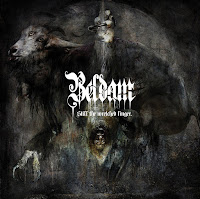 BELDAM
Still The Wretched Linger
Horror Pain Gore Death Productions
Beldam are a band from Virginia that plays a blackened mixture of doom and sludge metal and this is a review of their 2016 album "Still The Wretched Linger" which was released in June by Horror Pain Gore Death Productions.
A very heavy sludge metal sound starts off the album along with some grim black metal screams and the music also mixes in a great amount of doom metal elements and all of the musical instruments have a very powerful sound to them while death metal growls are also added into some parts of the songs.
Melodies can be heard in some of the guitar riffing and some songs also bring in a small amount of clean playing and some of the tracks are very long and epic in length and the solos and leads bring in elements of stoner metal and all of the songs stick to a very slow musical direction from beginning to ending of the recording.
Beldam plays a musical style that is mostly rooted in sludge and doom metal while also having more of a black metal vocal approach and a touch of death metal, the production sounds very professional while the lyrics cover death, despair, and decadence themes.
In my opinion Beldam are a very great sounding blackened mixture of sludge and doom metal and if you are a fan of those musical genres, you should check out this band. RECOMMENDED TRACKS INCLUDE "Needles" "From Cradle To Grave" and "Beauty's martyr". 8 out of 10. -Loki Astaroth

This review can also be read at A Different Shade Of Black Metal Zine. -DW
Posted by Dave Wolff at 11:43 PM