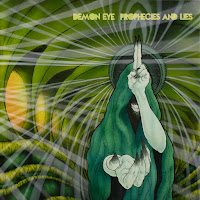 DEMON EYE
Prophecies And Lies
Soul Seller Records
Named after the Deep Purple song of the same title, Demon Eye unleash their fourth release and third full length since their inception in the early 2010s. Prophecies And Lies follows their debut EP Shades Of Black (2013), their freshman album Leave The Light (2014) and their sophomore Tempora Infernalia (2015). Released to European fans a month earlier, Prophecies And Lies has the distinction of having been produced by Corrosion Of Conformity bassist Mike Dean, himself a thirty-plus veteran. The collaboration between the band and Mike Dead makes sense because both bands hail from Raleigh, North Carolina and by first impressions Demon Eye is similar to the post-hardcore classic rock direction C.O.C. took in the 1990s. Long known for the attention paid to their songwriting, Demon Eye is praised by fanzines and webzines for nailing the mood and atmosphere brought to life by Deep Purple, Black Sabbath, Thin Lizzy and early Scorpions, and the storytelling of occult rock bands who came before them. With the exception of Coven and Ghost, occult rock today is almost nonexistent. As I’ve said, occult rock is more important a chapter in music history than many people are aware, and effort should be made to track the bands down on Youtube despite it having been overlooked in the 60s and 70s. Again you will find many unsung underground classics and perhaps wonder why they didn’t have more exposure in those days. As for Demon Eye, I can see the reason for the kudos bestowed upon their songwriting from their debut EP to their latest full length. The tracks recorded for Prophecies And Lies could well receive airplay on several outlets including net radio, pirate radio, college radio and radio shows specifically for metal. Prophecies And Lies boasts many sprinklings of accessibility, even if it was not written with mass acceptance in mind. I have said I am responsive to bands with an unrefined capacity for writing what they feel and generating transitional material, with no desire to impress others with their professed versatility. This band does what they choose and their multifaceted affectations speak for themselves. Their appeal is felt as much as heard and this is likely what will speak to people about The Waters And The Wild, In The Spider’s Eye, Infinite Regress, Politic Devine, Vagabond, Morning's Son and finally the title track (which quotes from W.B. Yeats’ The Second Coming) if you listen closely. While the foundations of these songs are solid, the proverbial “something for everybody” also applies if you’re into 60s acid rock, hard rock and commercial rock from the 70s, early 80s power metal and 80s mainstream metal. This fall Demon Eye will tour Virginia, Pennsylvania, Michigan, Indiana, and North Carolina. Earsplit PR has the relevant information about the upcoming tour. -Dave Wolff