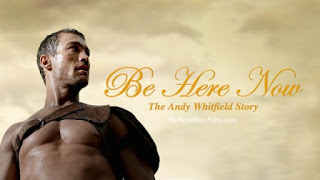 Be Here Now: The Andy Whitfield Story
Documentary
Release date: 2015
Director: Lilibet Foster
Starring Andy Whitfield, Indigo Whitfield, Jai Courtney
Many of us came to know him as the main character in Steven S. DeKnight’s Spartacus but not many of us know just how strong Andy Whitfield was or the hero he became. This documentary walks us through a very personal journey with Andy and his family as he finds out that his cancer has returned and the lengths he goes to in order to beat it.
We come to know the man not the actor and I have to say he is one of the bravest souls I’ve ever been privileged to get to know (even if through a documentary.)
This is not your typical biography. Andy and his family really let you see into the real situations, they let you feel the real fear, trepidation and inspiration – all the ups and downs. It’s not a rollercoaster ride by any sense of the word but I can tell you that after watching this, you will have a new found appreciation, admiration of the man who played Spartacus and perhaps a piece of him and the way he approached his disease to carry around with you.
I strongly recommend this to anyone who fell in love with the man who was Spartacus, likes Andy Whitfield or perhaps has someone who might be going through something similar. Truly inspiring! He will teach you about Being Here Now. -Roberta J. Downing