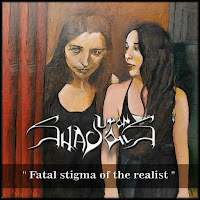 UPON SHADOWS
Fatal Stigma Of The Realist (feat. Matti Torro on drums)
To be released independently October 18
Natalia Arocena and Tamara Picardo return again with a single due for release next month. I have covered this band extensively and can’t think of a single instance when I was let down. I’m pleased to report there is no compromise to be found in their new song Fatal Stigma Of The Realist; in fact their vision appears to be growing more horrific and nightmarish as they continue composing material. The production here is flawless and brings out the atmosphere and subtle nuances they intended for this piece. Mika Pohjola was in charge of mixing and mastering this single when it was recorded at Oulu, Finland’s Soundmix recording studio. His work on it was the first thing to make an impression on me, though it goes without saying Upon Shadows and the term “beauty in darkness” are inseparable by now. The guitars and keyboards work incredibly well together, going far beyond simply complementing one another. On this song they really send a cold frost up your spine traveling straight to your brain and transforming your sense of self-awareness into an endless plain of ice. The piano, atmospheric guitars and backing vocals supporting the musicianship add multiple layers of this penetrating frigidity in a way that the band hadn’t previously accomplished. The vocals are much creepier than I remember from their older compositions. If you thought the demonic voices in The Exorcist and The Exorcism Of Emily Rose were perturbing you really should listen to Tamara Picardo’s vocals. It sounds like centuries decayed fingernails tearing pieces out of your brain matter, one clump at a time. Picardo is backed by bassist Arocena and drummer Matti Torro who both contribute greatly to the single’s depth and atmosphere. The band’s approach to playing this song fits subject matter that results from an equally intensive process of thought. The lyrics explore their concept of what they call “the inevitability of foreboding” which can be loosely explained as experiencing disconsolateness as well as bliss. Knowing one can’t exist without the other and knowing how finite mortality is, you can be sure this song makes its point. Ricardo Arocena’s artwork designed for the cover and the presentation of the video made for the song is compared to Oscar Wilde's The Portrait of Dorian Gray, something for readers of philosophical horror literature. Besides this I would recommend checking out Picardo’s beautifully executed dark ambient EP Hidden Terror Of All Dreams which was released in 2016. -Dave Wolff