EP Review: ANTZAAT The Black Hand Of The Father 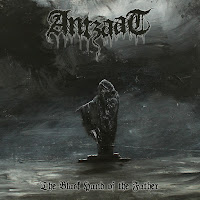 ANTZAAT
The Black Hand Of The Father
Immortal Frost Productions
To be released September 25, 2017
I recently heard of Antzaat when Surtur of Immortal Frost mailed me an advance copy of their debut EP. By now I can count on this label for quality extreme metal, as past promo packages from them have included Doedsvangr, Oath, From The Vastland and Astral Winter. These bands and the others on IFP will convince many it’s a label worth taking heed of. The label’s latest promo package with Antzaat’s CD and another CD from Drawn Into Descent arrived unexpectedly, and I figured there wasn’t much to lose by checking it out. This is not the first time I’ve made this observation, but The Black Hand Of The Father instantly brought me to when black metal began to mature and grow around 1996 to 1998, and began to realize the potential of the early Norwegian and Swedish bands. More elaborate progressions, selective addition of atmosphere and the earliest inklings of the ‘epic’ exposition writers topically associate with the genre. I listened to The Black Hand Of The Father several times and each time it grew on me a little more. The EP is limited to five hundred copies on compact disc so I’d suggest ordering a copy as soon as it’s made available. It’s also being released in digital download format if you prefer listening on your computer. Either way there should be a demand for it once the favorable reviews start circulating. The Belgian band takes all the archetypal fundamentals of late 90s black metal, magnifying them to a magnificent potency. Atmospheric presence, sunless and clouded, is imbued into their musicianship with a meticulous process so The Black Hand Of The Father has enough of an ethereal ambience without making it sound too oversaturated. The band knows what they are doing in this department as they hint at the immenseness of the universe they create, giving you enough to use your imagination and showing how much potential they have to progress. Equally stunning is how they ride roughshod through their songs, striking without warning from the start. The fuzzy guitar, distorted bass and hammering drums equalize ambient black metal, symphonic black metal, war metal and depressive suicidal black metal. Fans of everyone from Bal Sagoth to Maniac Butcher will be conscious of Antzaat’s drawing power. I should mention the time changes written into these songs which are executed in a steady, unforced manner. Circle Of Leeches is a fine example of this and one point from which the band should continue to sharpen their skills. Visit the band on Facebook for updates on shows and events they will be participating in. -Dave Wolff