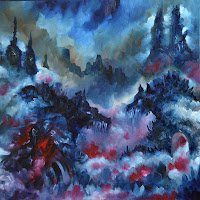 TOMMY STEWART'S DYERWULF
Tommy Stewart's Dyerwulf
Soman Records
As you would guess, Dyerwulf is fronted by bassist Tommy Stewart, best known for his work with the US thrash band Hallow’s Eve and the US heavy metal band Warrior before them. Other projects Stewart has been involved in are the black/death metal band Lestregus Nosferatus, progressive doom metallers Bludy Gyres and a solo project he founded in 2015. This latest endeavor of his began in 2016 as a bass/drums ensemble, with no guitars or synthesizers, with drummer Eric Vogt completing the lineup. Tommy Stewart's Dyerwulf is touted as doom metal, but I can see listeners of industrial and depressive suicidal black metal appreciating them as much as doom metal fans, perhaps even more so. The dank ambience and banausic monotone has a certain despondent attraction all its own; while some may initially find it too plodding and redundant, something about the grievous presentation of these songs beguiles you to stay. Whether it’s Stewart’s ghostly vocal style, or that he and Vogt recorded the entire album live, or that the material has such a basic and bare bones sensibility. Or it’s more likely that all these attributes joined together beget an apocalyptic style that has more in common with what it would be long after a catastrophic event that wiped out every living creature on earth and nothing was left in all the world except decaying structures and charred landscapes. Behold! Your World Now Burns, Through A Dead Man's Eye and Horrorshow fit this illustration of the end of all things, and there is even a cover song from The Monkees reworked and reinterpreted to correspond with the decrepitude the band bring into being. Porpoise Song as it’s included here sounds like the final gasp of life everywhere. The dispirited attitude is reflected in cover art by Jeff Grimal that yields a minute sample of the murkiness within. An album like this may be an acquired taste but if you’re so inclined you’ll get a great deal out of checking it out. -Dave Wolff