CD Review: SPHERE DEMONIS The Revelation Of The Pyramids 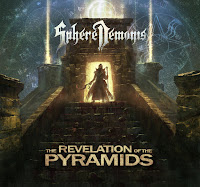 SPHERE DEMONIS
The Revelation Of The Pyramids
More Hate Productions
Sphere Demonis are a band from Russia that plays a brutal, symphonic and melodic mixture of death metal and deathcore and this is a review of their 2017 album "The Revelation Of The Pyramids" which was released by More Hate Productions.
Symphonic elements start off the album while also giving the music more of an epic feeling and they also mix in with the heavier sections of the music which also mixes in a great amount of deathcore style breakdowns along with the vocals being mostly death metal growls with a few screams.
When they music speeds up a great amount of blast beats can be heard along with the riffs also bringing in a great amount of melody while all of the musical instruments have a very powerful sound to them as well as some clean vocals also being added into certain sections of the recording and one of the tracks is all instrumental.
Sphere Demonis plays a musical style that takes brutal and melodic death metal and mixes it with deathcore and symphonic elements to create something very original, the production sounds very professional while the lyrics cover Sumerian and Akkadian Mythology.
In my opinion Sphere Demonis are a very great sounding brutal, melodic and symphonic mixture of death metal and deathcore and if you are a fan of those musical genres, you should check out this band. RECOMMENDED TRACKS INCLUDE "From The Depths" "Rage Array" and "Three Secrets Of Ishtar". 8 out of 10. -Loki Astaroth


This review can also be read at Dark Underground Music Zine, Doomed To Darkness Zine and Variety Of Death Zine. -DW

Track list:
1. The Path Of The Righteous
2. From The Depths
3. Behold The Hypnotic
4. I Choose You
5. Rage Array
6. Transeptum
7. Eternal Rest Gray Pyramids
8. Three Secrets Of Ishtar
9. Risen In The Sanctuary (ft. Alexander Spartanskiy)