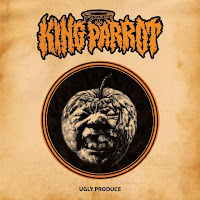 KING PARROT
Ugly Produce
Housecore Records (North America)
Agonia Records (Europe)
EVP Recordings (Australia)
To be released September 22, 2017
To be released for airplay September 18th 2017
Ugly Produce, the third full length release from the Australian thrash/grindcore band King Parrot, will bludgeon you incessantly if you’re not properly prepared for the band’s dirty aggression. Having been active since 2010, King Parrot has worked on mastering the art of mixing old school thrash and hardcore with 90s grindcore and the modern sensibility of Soulfly and Cattle Decapitation. This balance is firmly established in songwriting it has taken three full lengths to progress. Taking the approach of condensing dynamism into songs lasting from two to four minutes is most accountable for their similarities to punk and hardcore. It’s a method that has been pursued more times than can be remembered in one sitting, and there is enough of a youthful eagerness to convince you of their intention to expound on their style to mammoth proportions. Another characteristic of theirs is their ability to write songs that are anthemic but not in a way that is conspicuously pompous. Examples of this are Disgrace Yourself, All Hail The Grub and Ten Pounds Of Shit In A Five Pound Bag. The production by Jason Fuller (Blood Duster) brought out distorted overtones much like early grindcore, at least to me, or rather I should say the crust punk of Nausea, Doom and Amebix. The grainy sound fits the musical and lyrical motif of Ugly Produce, described by Earsplit PR as “a twisted, cantankerous ride through an outback graveyard, high on PCP, wreaking of animal feculence. The band has a habit of steering your mind toward the uglier side of human nature, leading you to think of slaughterhouses, addiction, rampant street violence and the like. Being that this album was recorded during a tumultuous period in world history, it comes as little surprise that the songs reflect the news we’ve been reading on a daily basis. This ties the material to their punk roots even more than the length of the songs. I only have one complaint, that the vocals sound too similar to those of Steve “Zetro” Souza (Legacy, Exodus, Tenet, Hatriot) but this is otherwise an album I would recommend. Their promotional video for Ten Pounds Of Shit In A Five Pound Bag is pretty twisted; check it out below. King Parrot plan to accompany Superjoint on their tour dates from September to October. Earsplit has information on this and the other bands appearing on this tour. -Dave Wolff