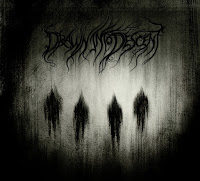 DRAWN INTO DESCENT
Drawn Into Descent
Immortal Frost Productions
Drawn Into Descent began in Belgium in 2013; their self-titled debut was released by Immortal Frost in two years’ time. Listening to this I could readily draw comparisons between them and My Dying Bride and I wouldn’t be completely off. Nor would it be a limiting or restrictive call, as My Dying Bride broke the mold of death metal and allowed for elements of doom metal to creep in. The impact this created was felt for years afterward, as much as those created by ambient side projects of Mortiis (Emperor) and other black metal musicians. Drawn Into Descent are opening similar doors into those depressive realms and showing us there’s much more to see. While this band comes from the school of black metal, a broad perception will lead you to see what they have in common with their U.K. counterparts (who are still active today. I might add). There is something about the presentation of the songs and the track chosen as the first that communicated with me as dawn was making its appearance outside my window. The mysterious spirits who were likely here with me may have left at first light, but their accounts from beyond were left behind for me to read and study. Their world may be limitless nightfall, but there is something there offering respite and comfort from daily existence on earth as these songs determine. The introduction, simply named Prelude, is a grey image akin to looking through a window at rain falling across the countryside, as if divine tears from that dark place are washing clean the world’s ugliness and corruption in the hope of starting over for humanity. The somber guitar line and bass signature entering into the introduction provide a semblance of overcast allure and a feeling the sun will eventually rise over a countryside purified of greed and hate. Once again this reminds me of a quote I remember in Omen 3: The Final Conflict, spoken by Damien Thorn himself: “Most people confuse evil with their own trivial lusts and perversions; true evil is as pure as innocence.” No matter how much humanity deceives itself, nature will always get the last word. The theme of Prelude has a way of reappearing in Solitude (which I’d say is a personal favorite), Pariah and Gallows. The lyrics are every bit as profound, describing those dark places as places of introspection and soul searching where you can remain in touch with yourself and be what you are, accepting your anguish as much as your joy. Drawn Into Descent first release from 2015 has reportedly sold out. IFP's first reissue is available in 1000 CD copies, 250 twelve inch vinyl copies and digital format. -Dave Wolff