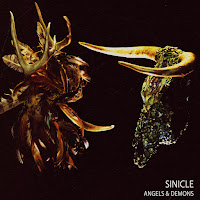 SINICLE
Angels & Demons
Independent
The long-awaited anticipation of SINICLE's new album, titled 'Angels & Demons' has finally reached its zenith as it has been officially released as of today. It is a real rollercoaster of dynamics and versatility as they strive to showcase the soft tones of melodic pop which is neatly embroidered in swarms of crushing heavy-rock passages. My first real introduction to the group was the song 'Damnation', the second song of this album. It featured an animated music video I distinctly remember being fascinated by due to its strange context. The notion I can take away from listening to the entire record is that they're a very unconventional group; forever coalescing harsh and raw musical offerings with polished bursts of neo-psychedelia. The real highlight for me is the title-track and its video; which is gripping both sonically and visually. It is a dark and brooding song in nature which evokes the feeling of a struggle with the self. It's one of the most professional videos I've ever seen by a group such as themselves who aren't getting nearly enough the attention they rightly deserve - and if you're on the off-chance hoping to see a fully-grown man drenched in black ink then you won't be disappointed. 'Death Coast' is definitely one of my favourites due to its reliance upon grooves. It features a mid-point section that wouldn't seem out of place in a COCTEAU TWINS record but primarily the song seems to showcase a death 'n roll inspired feel. 'Rabbit Hole' is a fast-paced ditty which I can only imagine to be a representation of the woodland creature protagonist on a sprint. 'Baltimore' is probably one of the album's focal point numbers due to how angst-ridden and aggressive it is. The group do have an experimental facet as they are keen to shock listeners with short instrumentals. To be even more precise they'd probably be considered "moments" above anything else due to how short and minimalistic in style these passages are. 'Esoteric' is fourteen-seconds long and consists solely of choppy guitar voicings which occur in rapid succession intermittently. 'DEER XING' is noise accompanied by phased harmonics whereas 'Miller Time' is a track I have a feeling is actually based upon an extended theme they originally wrote but had to shorten. It's an interesting piece but quickly disintegrates into the unknown. The final three numbers, 'Broken Silence', 'Free Like Me' and 'Operations Activate' are where the group seem at their most relaxed and focused. I think it's a strong record and would recommend anybody to give it a try because thereare moments that could virtually appeal to any type of listener. I'll be surprised if this isn't their breakthrough album. -Jaime Regadas